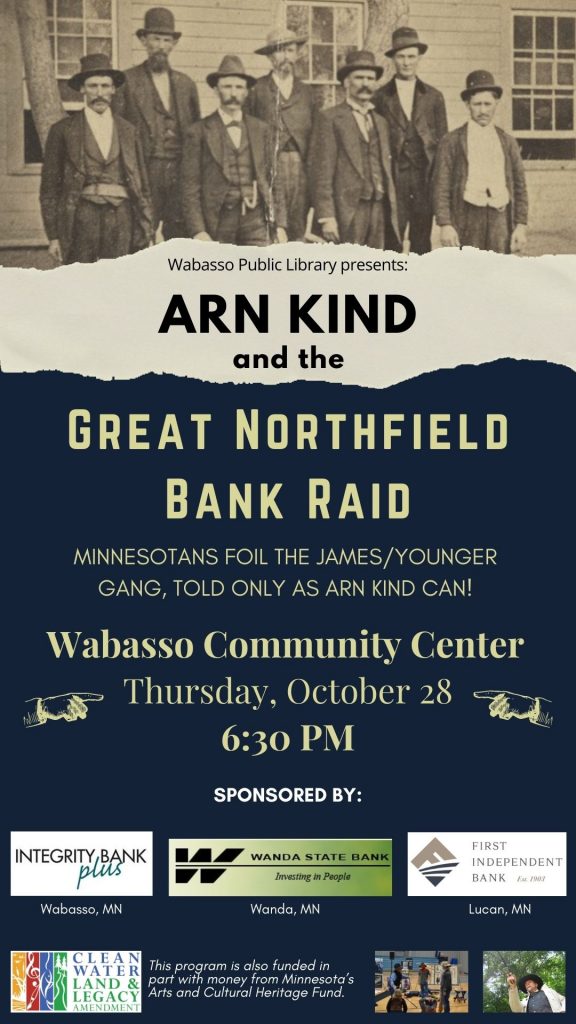 The Wabasso Public Library is holding a free program open to all on October 28, at 6:30 PM, at the Wabasso Community Center. THE GREAT NORTHFIELD BANK RAID will be presented by Arn Kind, a teacher of 40 years, who will come in costume to relate an important historical event where Minnesotans were key players in making history.

In 1876, Jesse James and the notorious James-Younger Gang rode into Minnesota intent on robbing a number of prosperous banks, and first on the list was in Northfield, MN.

The gang believed that it would be a simple matter to ride into the state, into the banks and make forced withdrawals at the point of their guns. They greatly underestimated the resolve of the people of Minnesota. In the days when there was no FDIC to protect their savings, local citizens were not about to let the gang steal their future. The shootout that ensued on the streets of Northfield would spell the end of the James-Younger Gang.

Come, hear and see the events of September 7, 1876 play out before you as Arn Kind brings this exciting historical event to life. The action starts on Thursday, October 28th at 6:30 p.m. at the Wabasso Community Center.

This program is free and open to the public, and is sponsored by the First Independent Bank of Lucan, Wanda State Bank, and Integrity Bank Plus of Wabasso. This program is also funded in part with money from Minnesota’s Arts & Cultural Heritage Fund.